In the most extensive review of its kind, the housing charity combined official rough-sleeping, temporary accommodation and social services figures. This showed the number of homeless people in Britain has increased by 13,000 in a year. However, as government records are not definitive the true figure of homelessness is likely to be even higher.

Shelter has launched an urgent appeal in response to this mounting crisis, calling on the public to support its frontline advisers as they work tirelessly to help people to stay in their home or find a new one.

Polly Neate, chief executive of Shelter, said: “It’s shocking to think that today, more than 300,000 people in Britain are waking up homeless. Some will have spent the night shivering on a cold pavement, others crammed into a dingy, hostel room with their children. And what is worse, many are simply unaccounted for.

“On a daily basis, we speak to hundreds of people and families who are desperately trying to escape the devastating trap of homelessness. A trap that is tightening thanks to decades of failure to build enough affordable homes and the impact of welfare cuts.

The charity’s report, ‘Far from alone: Homelessness in Britain in 2017’ also shows just how hard it can be to escape homelessness amid a drought of affordable homes and welfare reforms, such as the freeze on housing benefit and recent roll-out of Universal Credit.

“As this crisis continues to unfold, the work of our frontline services remains absolutely critical. We will do all we can to make sure no-one is left to fight homelessness on their own. But we cannot achieve this alone; we urgently need the public’s support to be there for everyone who needs us right now.”

In England, where more people are affected, over a third of those living in temporary accommodation will still be homeless in a year’s time.

One in every 200 people in England is currently homeless. However, to identify where the epidemic is most acute, the charity mapped the top 50 hotspots with the highest levels of homelessness in the country.

Case study: Victoria, 72, from London, is living in temporary accommodation after being made homeless because her landlord decided to sell her privately rented home, and she couldn’t find anywhere else to go.

Victoria said: “After getting my eviction notice I desperately tried to find another place to rent but to no avail. I found landlords either didn’t want to let to someone on housing benefit, even though I’ve always paid my rent, or the properties were simply too expensive for me.

“Presenting myself as homeless was in itself humiliating and scary. You’re left sitting around for hours, waiting to find out if you’ll have a place to stay that night. I’m in temporary accommodation now. I spend every day dealing with letting agents, searching for a place to rent, or just some way out of here. If I get the chance to visit a friend’s house it’s so hard to come back to this place afterwards, and leave behind the warm environment a of a real home.

“The whole thing makes me feel like there is something wrong with me. I’ve moved around a lot, and yet for the first time in my life I feel like I have no control over my situation. I’m not easily scared, but the fear is terrible – you just don’t know where you are doing to end up. I’m in a constant state of anxiety and stress. I hope that finally with Shelter’s help, I might one day find a safe place to call home again.”

Heatmap of homelessness hotspots in England 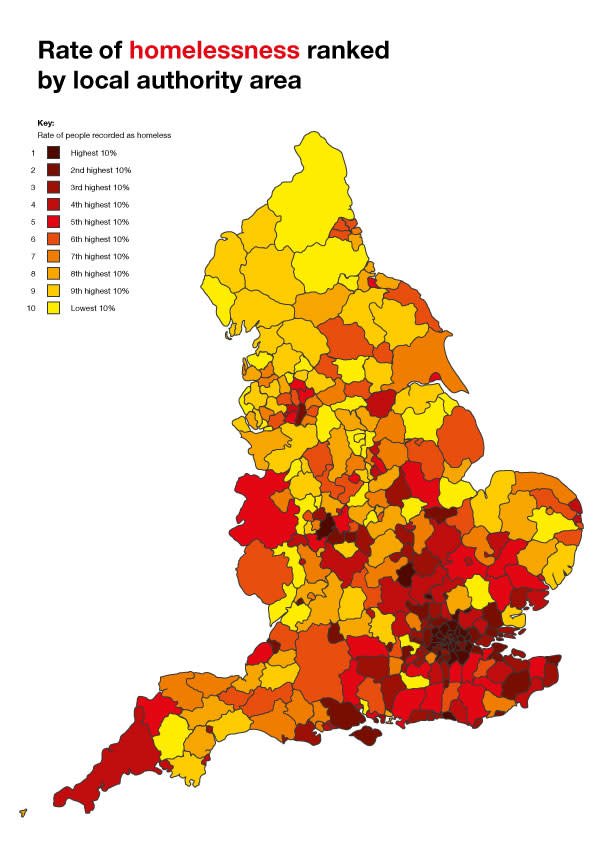 Compiled from official statistics on temporary accommodation (as at Q2 2017) and rough sleeping (Autumn 2016). TA figures adjusted to estimate total number of people (adults and children), rather than households.

Sources: [1] Calculated from DCLG Homelessness statistics Q2 2017, Households that are homeless, owed a legal duty and living in TA, estimated as people (adults and children) [2], DCLG Homelessness statistics: Rough Sleeping, Autumn 2016 (latest available) [3] Single bed spaces in hostels, Homeless Link, 2016. 10% has been taken off the totals to account for voids and the number of single people in TA from the statutory figures are subtracted to ensure a conservative estimate with no double-counting.  [4] Results of an FOI by Shelter requesting the number of families owed a duty by Social Services and housed in TA under Children's Act legislation. Less than 50% of areas responded, so this is a very conservative figure. People figure calculated by applying average family size from [1], [5] ONS mid-year population estimates for 2016. Estimates for Scotland and Wales calculated by applying average number of people per household in TA in England to respective figures. Figure has risen by 13,000 people in one year, when compared with an equivalent for Q2 2016.