New Shelter report reveals ‘rigged’ system favours big developers and land traders rather than families, as it sets out a new model for building homes

The current system of housebuilding in England is failing families by producing high-priced and poor-quality homes, according to new report from housing charity Shelter.

Its new report shows that typical new homes built today are out of reach for eight in ten (83%) working private renting families across the country – even if they used the government’s Help to Buy scheme. The West Midlands ranked as the worst hit region, with a staggering 93% of families not able to afford to buy an average-priced new home.

Today’s report warns the current system will never work for ordinary families because it rewards developers and land owners more interested in trading land at high prices than in building homes. To put an end to this, the charity has unveiled New Civic Housebuilding a new model of housebuilding designed to deliver genuinely affordable, high-quality homes.

Alongside being unaffordable, many new build homes are also poor quality. In research by Shelter and YouGov, half (51%) of new home owners say they have experienced major problems with their properties including issues with construction, unfinished fittings and faults with utilities.

The report comes shortly after the government described the housing market as ‘broken’ and was critical of ‘fat-cat developers’ during the launch of its housing White Paper.

Graeme Brown, Shelter’s interim chief executive, said: "Big developers and land traders are making millions from a rigged system while families struggle with huge renting costs and have to give up on owning a home of their own, which has become nothing more than a pipe dream.

“For decades we’ve relied on this broken system and, despite the sweeteners offered to developers to build the homes we need, it simply hasn’t worked. The current way of building homes has had its day and it has failed the nation.

“The only way to fix our ever-growing housing crisis is for the government to champion a bold new approach which responds to communities to build the genuinely affordable, beautiful homes they want – as we have done as a country in the past. Until this happens, millions of ordinary families across the country will continue to pay the price.”

Helen, 30, and her daughter Lily-Mae, 4, live near Manchester. Helen works full-time as a manager in a hotel and is priced out of buying a home:

“Ownership is definitely not an option. Maybe it will be when I hit my 40s but it’s out of sight now.

“I’m fortunate at the moment because I have a good landlord. But there’s always the risk that you can get evicted for no reason and have to start again. That happened to my family several years ago and it caused a huge amount of stress.

“Everyone wants security, especially if you’ve got young children. You need it just to get on with life and not have to switch schools and things like that.

“There should definitely be more affordable housing for families that is realistically within reach of working people on a normal income. Something definitely needs to change.”

What is New Civic Housebuilding?

Under the New Civic Housebuilding model, we can create a large number of good-quality, affordable homes with infrastructure that meets the needs of communities.

This model of housebuilding was used to deliver the Georgian new towns of Edinburgh and Bath, the Edwardian Garden Cities and the post-war New Towns.

Under New Civic Housebuilding land is brought into development at lower price with strict conditions attached. Clearer, and lower land costs mean that:

We have an explainer video with more information on New Civic Housebuilding. Please feel free to get in touch if you’d like to view it or add it to your website.

Alternatively, visit our New Civic Housebuilding website here for more information including the Manifesto and full report. (Website live at 00.01, 02.03.2017)

Infographics are available on request, including: a graphic on housing quality, graphics explaining New Civic Housebuilding and an updated Shelter graph showing housebuilding levels since 1923. Please contact Shelter press office on press_office@shelter.org.uk or 0207 505 2162. 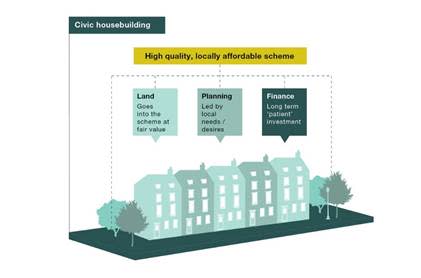 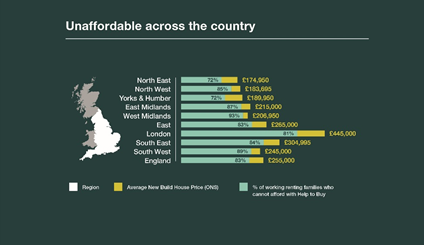