Sky-high house prices have left hundreds of thousands of older people stuck in expensive private renting and now, new research by Shelter reveals that a quarter (25%) of private renters age 65 and over worry about becoming homeless.

Official government figures show this fear is very real, with more than 8,000 people aged 65 or over becoming homeless or being threatened with homelessness in the last year. Currently 8% of privately rented homes are headed by someone aged 65 or over.

The poll of 3,995 private renters found 67% of 55-64-year-old private renters say they won’t be able to pay rent on a suitable home when they retire without needing housing benefit.

Furthermore 48% of this group said the high cost of renting means that they won’t be able to afford to retire.

Polly Neate, chief executive at Shelter said, "We’re facing a ticking time bomb of older renters who won’t be able to afford their rent when they retire, which could result in thousands more having to rely on housing benefit just to get by. At worst, in the next decade we could see a generation of older renters at risk of homelessness as a result, causing untold unhappiness and disruption for thousands of older people.

"It almost goes without saying how hard homelessness is on older people, imagine spending your late 70s in a grim hostel room and sharing a bathroom with strangers, not knowing where you’ll be staying from one week to the next, when instead you should be enjoying your hard-earned retirement.

“People desperately need another option, and social housing is the solution. If any future government wants to save older renters from homelessness then it will need to commit to 3 million new social homes in the next 20 years, so no one has to face retirement without somewhere to call home.”

Gail Hickman, 68, from Bideford Devon is renting privately and was recently served notice on her property just nine months into her tenancy.

“I gave up a very secure tenancy, where I had lived for 14 years, to move from a house to a bungalow for health reasons. It took me a year to find this property, close to my previous address and a promised long-term tenancy. Have now been given notice to quit after 9 months as the property is 'required for their family'. It turns out there is a long history of offering long term tenancy here then putting people out within a year.

“The tenancy has been a nightmare from day one, with landlord and his wife wandering in and out to the point where I had keep all doors locked when I am at home. The septic system has collapsed, first spilling sewage all over my bathroom floor and now in my garden.

“I am a gold star tenant, pay my rent in full on time, live quietly, don't drink or smoke and have excellent references from my previous landlord. My previous rent was £525, then increased to £650 for this property and now rental prices for bungalows have gone through the roof. As a state pensioner on benefits so many properties are simply unaffordable for me, plus all the cost and upheaval of moving again in such a short time. I am beyond distressed at the dreadful bullying that I have endured since arriving here and now being given notice two months into a new tenancy agreement.” 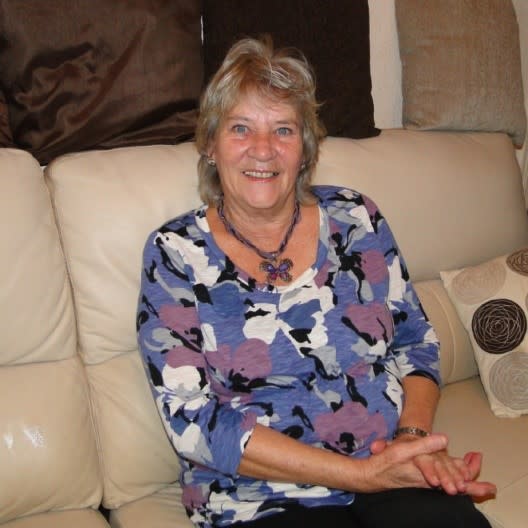 Gail Hickman is urging people to give £1 out of their Christmas spend to Shelterbox to help people in the Philippines hit by Typhoon Haiyan.

Survey results are from a YouGov survey of 3,995 private renters in England, online, weighted to be representative of all private renters in England using official statistics provided by Shelter, 18+, Aug-Sept 2019. 391 were aged over 65, and 25% of this group agreed with the statement ‘I worry about becoming homeless’; 376 were aged 55-64 and 48%% of this group agreed with the statement ‘The high cost of renting means that I don't think I'll ever be able to retire’ and 67% agreed with the statement ‘If I am still renting when I retire, I won't be able to pay the rent on a suitable home myself without having to rely on benefits/ allowances to pay the rent’.

The YouGov survey also demonstrates the toll private renting takes on older people: older private renters who have moved between privately rented homes in the last five years are substantially more likely to say that they would have preferred not to have done so than younger renters (33% of those aged over 65 [sample size: 135] said ‘I would have preferred to have stayed in my previously rented home’, compared to 13% under 25 [sample size: 205]).

Official statistics on the number of privately rented homes headed by people aged over 65 are from annex table 1.4, English Housing Survey, MHCLG, 2017/18.