This commission came together in the aftermath of the Grenfell Tower fire to answer a question, neglected for too long by successive governments: what is the future of social housing?

What is the future of social housing?

Today, we live in a country that is feeling the effects of 40 years of failure in housing policy. The failure in that time to provide a clear answer to this question of the future of social housing has been at the heart of the problems in our housing system, and has had an impact on almost every other part of the system. The drop in the numbers of young families moving into ownership, the rise of pensioners in insecure unaffordable private rentals, and the homelessness that scars our society.

We are a group of independent commissioners from across the political spectrum and from a diverse range of backgrounds. Over the last year, the process of the investigation we have undertaken has been wide as well as deep. More than 31,000 people took part in our Big Conversation. We spoke to many, surveyed thousands, and a wide variety of individuals and organisations submitted evidence, from the National Housing Federation to Mind, the mental health charity.

That investigation has shown in vivid detail the housing crisis as it exists in England today. As we set out in Chapter 1, it is a crisis principally of those who rent, not through choice, but because of the unaffordability of housing for would-be homeowners has left millions in insecure and expensive rented accommodation. Most private renters on low incomes struggle to afford their rent, so too many cut back on food or clothing, or go into a spiral of debt they have little hope of escaping. With private renters afforded little legal protection from eviction, families are forced to move home and school, with a devastating impact on their children’s education. And private renting can be very unsafe: most private renters face problems with their homes that can include electrical hazards, damp, and pest infestation. One in seven private rented homes pose an immediate threat to health and safety. If private renters make a formal complaint, research suggests there’s a 50:50 chance they’ll be handed an eviction notice within six months.

Stigma and prejudice linked to housing are rife. When social renters have issues, their complaints can go nowhere and too many feel powerless to influence the decisions made about their homes. And in the private market, the practice of refusing to rent homes to those receiving benefits is widespread.

At the sharpest end of the crisis, more and more people are being left homeless. An alarming 277,000 people are now homeless in England, most commonly because they’ve lost their private rented home.

How have we got here? In Chapter 2, we examine the trends of rising prices, falling ownership and an expanding – but increasingly unfit – private rented sector, paid for by a rapidly rising housing benefit bill.

In Chapters 3 and 4 we set out how the roots of the current housing crisis are found in the decline of social housing over the last 40 years. From the Second World War and through to 1980, Conservative and Labour governments were building an average of around 126,000 social homes every year. Last year, only 6,463 new social homes were delivered. This decline in social housing has been a major factor in many of the problems we now face:

None of these are outcomes which any government has ever planned or sought, but all of them are the result of the choices of successive governments. No party has ever argued for the explosion in private renting or the rising cost accompanying it, yet without a radically different approach we face a future in which:

This commission recommends a decisive and generational shift in housing policy. We need to move towards a programme of investment and reform, based on a new vision for social housing at the heart of a working housing system. In Chapter 5, we set out this modern vision of social housing; one which builds on the original principles espoused by both Harold Macmillan and Aneurin Bevan and also addresses the 21st Century social and economic challenges.

Our vision is of investment in social housing that meets both needs and aspirations. It extends the offer of a secure social home to many more families – and many more people reaching 6 retirement, who would benefit from a lower-cost, secure tenancy. This is an opportunity to learn not just from our history, but also from the best of international experience (countries such as Singapore, Denmark, and Austria), to create a new generation of housing equipped to meet the new challenges of modern economies and ageing societies.

In Chapter 6 we describe the reforms we believe are needed to achieve this – to ensure the services that renters receive are up to standard, to bring the consumer regulation of housing in line with other sectors and to hold landlords to account. Residents must have a voice, both in key decisions and when things go wrong. We need a new regulator working across social and private renting to protect residents, and to set and properly enforce common standards. A new national tenants’ organisation or union is needed, to give social housing residents a voice at a regional and national level.

In Chapter 7 we describe the urgent reforms that must take place in private renting to accompany a reformed social housing sector, with greater protection from eviction and improved standards overall.

And in Chapter 8, we recommend a historic renewal of social housing, with a 20-year programme to deliver 3.1 million more social homes. This will allow the benefits of social housing to be offered much more widely, providing both security for those in need, and also a step up for young families trying to get on and save for their future.

It is a vision which will provide new hope for those in greatest housing difficulty, such as people who are homeless and disabled people. It will also provide opportunities for young families trapped out of ownership, and for those reaching retirement and looking at the prospect of older age in insecure, unaffordable, unsuitable private renting.

Different governments will undoubtedly take different judgements about the balance of tax, spend and borrowing. In this report, Capital Economics set out in detail the costs and benefits of a 20-year social home building programme if it is funded in the early years through borrowing (as all infrastructure programmes tend to be) and then pays back through returns to government, savings in the welfare system and increased tax receipts.

Over twenty years, Capital Economics show the gross additional cost is on average £10.7 billion per year. However, this gross cost will be reduced, firstly by the direct benefits to government of increased infrastructure spending and savings in the welfare system, and secondly by the returns to government arising from the knock-on economic benefits across the economy.

This would represent a substantial investment, but we believe it is essential to meet the needs of people across our country. In comparison, government currently spends £21 billion annually on housing benefit, and budgets £62 billion on capital expenditure annually. 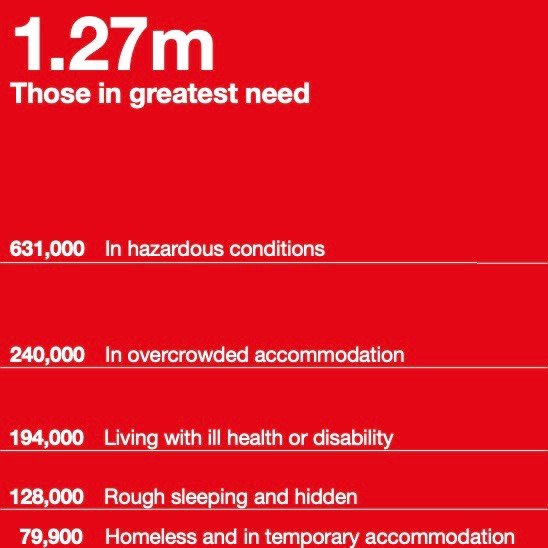 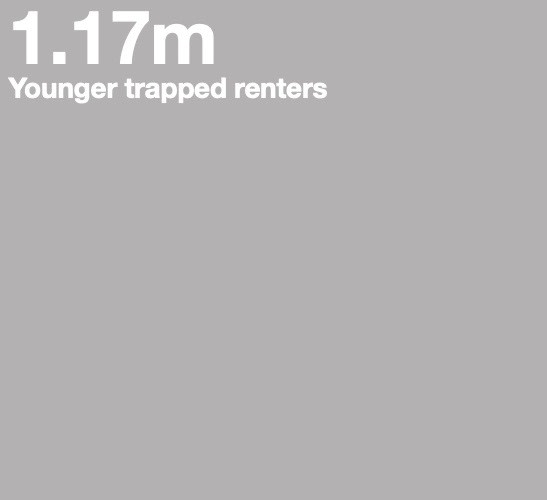 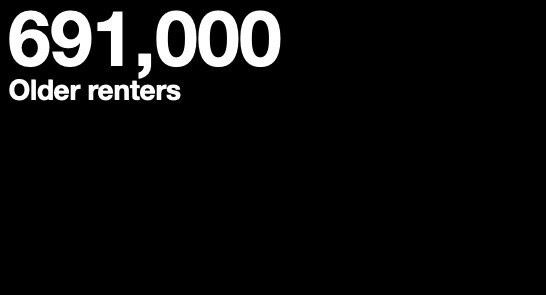 Kirsty, 26, lives with her daughters aged five and two. She split from their dad a year ago, and is now struggling to afford her privately rented flat in Harlow.

‘The first property we moved into was in terrible condition. We could never keep the place warm as it was single-glazed and the doors had holes in. Then the heating broke, and we spent a month over Christmas without any heating. My little girl had an operation during that time and she had to come home from hospital to a flat with no heating. The landlord just wasn’t willing to fix anything.

In the end we had to move, which cost me so much money I’ve now only got £6 in my bank account. My rent is £900 a month and this was the cheapest flat on RightMove all summer. I get £640 a month in housing benefit and the rest I have to make up from my other benefits. The kids get the food they need and I eat the leftovers or whatever I can afford. We can’t go on holidays or have days out – my rent is just too high for me to be able to do anything.

I’d love to work but I just can’t afford the childcare. It feels like whatever avenue I take I lose at something – I chose to have kids but I didn’t know I’d be doing it on my own. I’m on the waiting list for social housing but I’m so low down – I just don’t know how I’m ever going to be better off.’

‘I don’t know how I’m ever going to be better off. I’d love to live in social housing but I don’t stand a chance.’

To help deliver the social housing we need, government must also:

The time for the government to act is now. In the shadow of the Grenfell Tower fire and ten years on from the financial crash, with the nation divided by a worsening housing crisis affecting more and more people, the appetite for change has never been greater. With government about to undertake a five-year spending review, and current spending on housing shockingly inefficient, a new political consensus on social housing is needed.

As commissioners we started with many different perspectives, but we have reached a consensus in our findings which we hope foreshadows a new national consensus. We believe this vision is the only way the government can meet its 300,000 target for new homes each year. It will provide an affordable, stable home for 3.1 million households. It will save £60 billion in benefit costs over thirty years. It will command huge public support. It will, more than any other change, properly address the housing crisis and give people hope for the future. We have a historic opportunity to change the path we are on, and we urge all political parties to adopt these plans.